The cost of living well 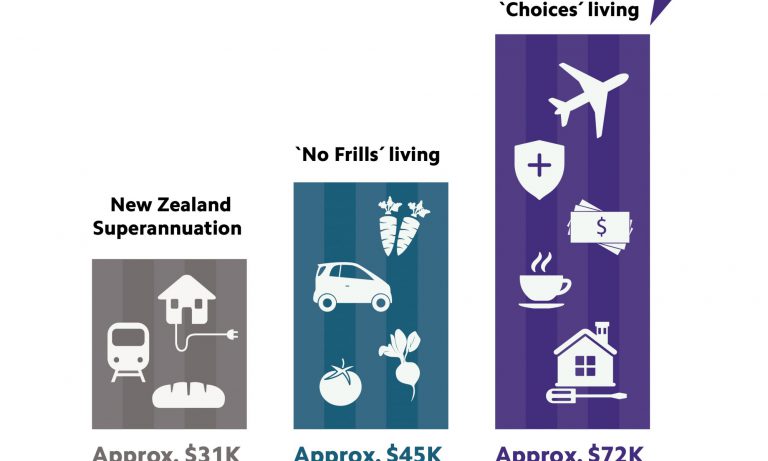 Listed as one of the top 12 countries in the world to grow old in by the Global AgeWatch Index for three years in a row, one might think that Kiwi seniors are living the retirement dream – travelling overseas, learning new skills and pursuing often neglected hobbies – but is this true for most retirees?

According to the most recent Retirement Expenditure Guidelines report, NZ Superannuation alone no longer provides enough for a simple standard of living in retirement, let alone one that Kiwis aspire to enjoy. For the first time since the Massey University’s Westpac Fin-Ed Centre started analysing the shortfall between NZ Superannuation and what retirees spend in 2012, all households – including those groups with a ‘no frills’ lifestyle – now have a gap between what they’re spending and what they receive.

The guidelines, which are produced annually, calculate what retirees currently spend to maintain either a ‘no frills’ retirement – living on a limited diet with no holidays – or a more fulfilling ‘choices’ lifestyle, which includes some luxuries such as eating out and going overseas. Costs are calculated for one and two-person households in both metropolitan (Auckland, Wellington and  Christchurch) and provincial areas.

With the shortfall increasing, pensioners are under pressure to find money elsewhere and, for the first time since the study commenced, findings include a list of how New Zealanders over 65 are making up the difference.
One of the key sources of income was wages and salaries, which accounted for approximately half of a household’s additional income and reflects the growing trend of working past 65.

A recent Financial Futures survey found that 16% of Kiwis surveyed who were yet to retire were planning to work past 65; 33% for non-financial reasons and 30% to make ends meet.

Report author Dr Claire Matthews from Massey Business School says that while the gap between NZ Superannuation and household spending
has increased significantly – doubling in most cases – she doesn’t necessarily see this as a cause for concern.

“To some extent, this reflects households being better prepared for retirement, allowing them to top up their superannuation payments to give them the lifestyle they want. On the other hand, the data doesn’t specify how much of the shortfall may come from other avenues, such as family assistance or reverse mortgages, so the ability to make up the shortfall may not be due to better preparation in all cases.”

With this in mind, the report includes the estimated savings needed to fund the gap between expenditure and NZ superannuation for each household type.

Late in the game

For those who find themselves on NZ Superannuation with no means of additional income, Heartland Bank’s reverse mortgage can make up the shortfall. Designed for seniors, a reverse mortgage allows borrowers to access
a portion of the equity in their home without the need to make regular mortgage repayments.

As the concept becomes more widely known, a greater number of retirees are opting to use a reverse mortgage to live life to the fullest.